At work, we’re getting ready to roll out Adobe CC via Named User Licensing. In short, this means that users will install an Adobe CC Desktop Application (CCDA) that we provide, and log in with some Adobe credentials that we also provide (and manage). In this way, we can assign application licenses on an as-needed basis, instead of purchasing complete Adobe Suite licenses for all of our users.

We currently use Munki as our software distribution mechanism on macOS. Because our users have varying needs, we provide them with just the CCDA through Munki, and allow them to install the software they want/need. If they no longer need CCDA, they can just remove it through Munki as well. Sounds simple, right?

Not quite. As Adobe notes in their documentation,

Indeed, the results of attempting to do so are quite messy. 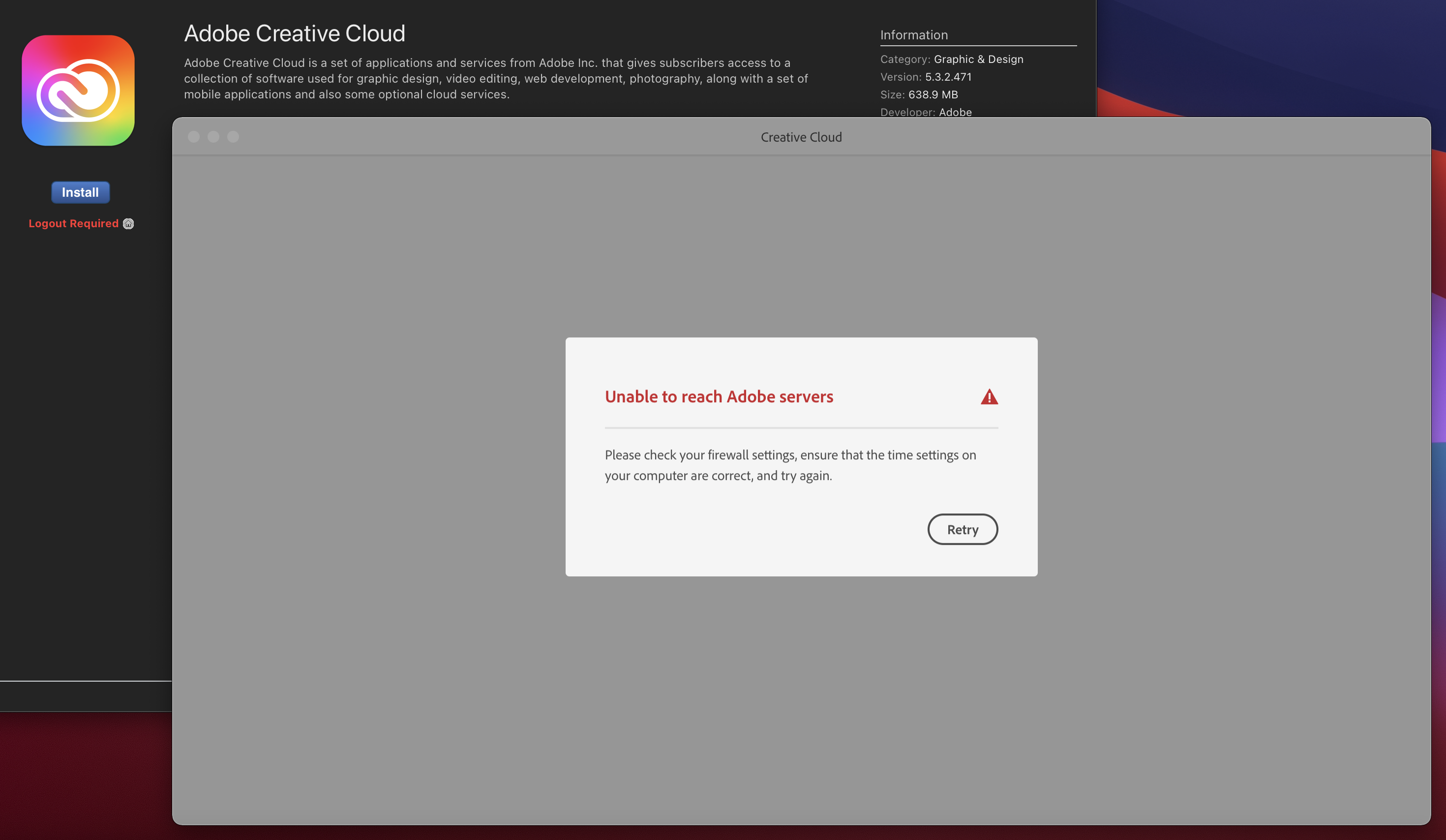 An obvious solution is to then inform users that they should uninstall all of their CC apps before trying to remove the CCDA. We plan on doing this, although Munki prompts are often ignored. So then, we consider a second possibility - can we remove the installed Adobe CC apps before removing the CCDA?

Adobe also provides for a second, more centralised option. As far as I can tell, the only requirement for this method to work is that the CCDA is installed, which is ideal for us, as we want to run it before removing the CCDA using the uninstaller. This second option looks like this:

You need to run this command with superuser privileges for it to work properly (which Munki does anyways), but it does what it says on the tin: removes Photoshop (PHSP) version 21.0, without removing any user preferences. There are, however, two caveats to this approach:

Adobe helps us a little with both of these points. They have an article detailing the SAP codes and current base versions for each product.

Remember that Uninstall directory I mentioned earlier? It turns out that all the items in there follow a naming convention, which is the applications SAP code along with its base version. As an example, Photoshop version 22.1 uses an uninstaller file named PHSP_22_1.app. This means that, for each CC app that the user has installed, we can get its SAP code, and its base version if we’re willing to parse that information. And, with that information, we can kick off the uninstaller mentioned previously.

So now we need to write something that:

Armed with this knowledge, I wrote a little Python script that does the above (without removing the packages, yet).

The script above will give the resulting output:

As it turns out, some Adobe CC apps don’t allow us to get their base version in this way (most notably Lightroom Classic, Lightroom CC, and Adobe XD). In fact, these apps require you to use the base version listed on Adobe’s site, instead of the one that the app itself provides. As a result, for these apps we actually have no reliable way to remove them from the system without either hard-coding their base versions, or using an additional tool. This is frustrating, as this issue isn’t a problem with all Adobe CC apps - only a handful. After asking about this in the #adobe channel in the Mac Admins Slack, it was determined that this wasn’t something that could reliably done with the information that the CCDA leaves on the device. I’ve got a support ticket open with Adobe to see if there is a potential solution to this, or whether it would be possible to create a solution to this - any update on that will be posted here.

In the meantime, I’ve used the script above as an pre_uninstall check for the CCDA, where if the uninstall_array isn’t empty, uninstallation of the CCDA will be prevented. This script can be found on my Github.

Thanks for reading! Suggestions? Questions? Send me an email.